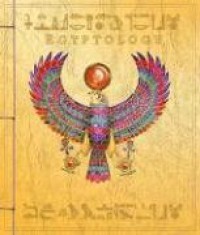 Thanks to an errant Tumblr post, I recently found myself reminiscing on my childhood obsession with Ancient Egypt. Books, video games, movies-- I devoured anything and everything related to pharaohs or pyramids with zeal.

And of course, like any aspiring eleven-year-old archaeologist, I had a copy of EGYPTOLOGY.

As the second book in the -Ology series, EGYPTOLOGY interweaves junior-level facts about Ancient Egypt into the pulp-y journal of a would-be 1920s adventurer, who may or may not have fallen victim to an ancient curse. In any case, it's clear that the publishers valued style over substance, because the book resembles a scrapbook of photos, letters, brochures, and other interactive elements. Unlike DRAGONOLOGY, the subject matter and fictional plotline of EGYPTOLOGY is treated much more seriously. Page after page is devoted to gorgeous artwork and detailing the journey of "Emily Sands" as it explains the various cultural and archaeological experiences that she has. It's sort of like DINOTOPIA meets INDIAN JONES. I have no doubts that I was not the only one who was utterly convinced that this was a true story as a child!

As for the "facts" themselves... it's a decent introduction to the topic given the age range of the target demographic. It covers the basics: mummies, monuments, the Book of the Dead, and the like. However, too many interesting historical tidbits are given only a sentence or two long explanation, sometimes with no rhyme or reason to its placement within the text. Thankfully, the stylistic touches related to the 1920s setting of the journal itself, such as period appropriate advertisements, makes up for the lackluster content and adds a much needed sense of cohesion. It also brings to light some of the more questionable approaches to archaeology in the past, such as using gunpowder on pyramids or having tea parties in tombs.

The book definitely leaves the reader wanting to learn more, and that's not a bad desire to invoke in its young target audience. If nothing else, it's a great book for youngsters aged 6-9 making the transition from picture books to tougher reads.
Tweet